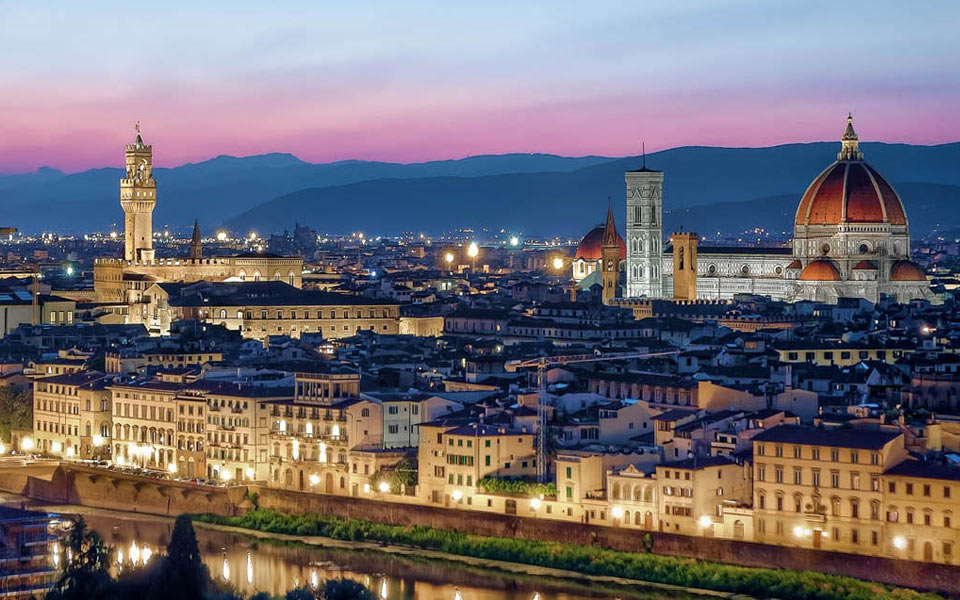 Florence, the capital of Tuscany, hosts many masterpieces of Renaissance art and architecture. One of the most famous places is the Duomo, the cathedral with a tiled dome designed by Brunelleschi and Giotto's bell tower. The Accademia Gallery exhibits the sculpture of Michelangelo's David while in the Uffizi Gallery there are Botticelli's Birth of Venus and the Annunciation by Leonardo da Vinci.

The heart of Florence is Piazza della Signoria, with the majestic Palazzo Vecchio, with the gallery of sculptural masterpieces in the Loggia dei Lanzi and the nearby Galleria degli Uffizi, one of the most renowned art museums in the world. Not far away is the religious center of the cathedral of Santa Maria del Fiore, with its majestic dome (the largest ever built). At the time of the Grand Duchy, it was said that with its shadow it would cover all of Tuscany. The huge Cathedral is magnificently accompanied by Giotto's Bell Tower, one of the most beautiful in Italy, and by the Baptistery of San Giovanni, with the famous bronze doors among which the golden door of Paradise stands out. 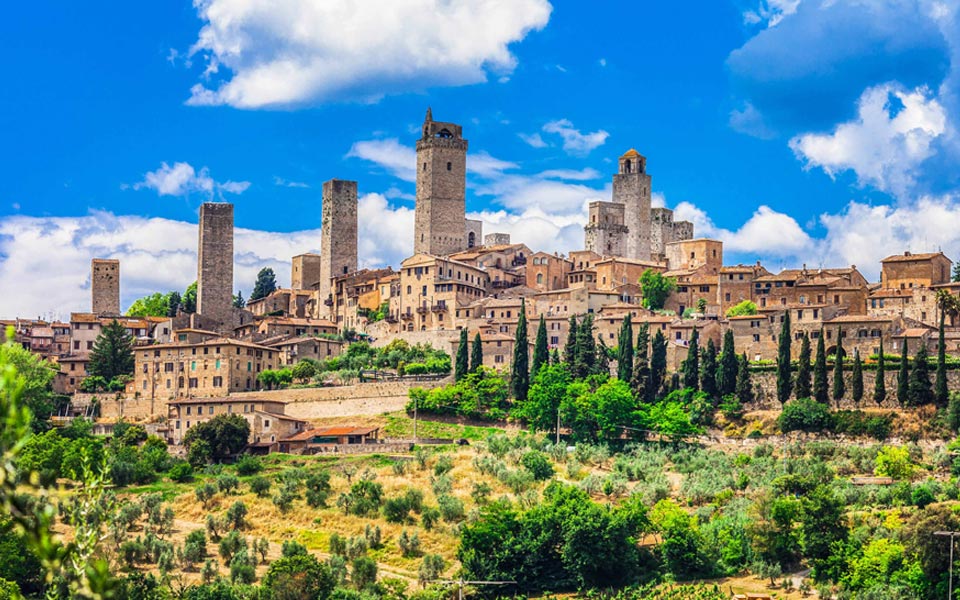 San Gimignano is a hill town in Tuscany located south-west of Florence. Surrounded by 13th century walls, the centerpiece of its historic center is Piazza della Cisterna, a triangular square flanked by medieval houses. In the skyline of medieval towers stands the Torre Grossa in stone. The Cathedral of San Gimignano is a 12th century church where it is possible to admire the Ghirlandaio frescoes in the Chapel of Santa Fina.

San Gimignano rises on a place inhabited certainly by the Etruscans, at least from the III century a.C. The hill was chosen for strategic reasons, being dominant (324 m s.l.m.) on the upper Val d'Elsa. On the slopes of Poggio del Comune (624 m s.l.m.) are the ruins of Castelvecchio, a village from the Longobard era. The first mention dates back to 929.

In the Middle Ages the city was located on one of the routes of the Via Francigena, which Sigerico, archbishop of Canterbury, traveled between 990 and 994 and which for him represented the 19th stage (Mansio) of his return journey from Rome to England . Sigerico named it Sce Gemiane, signaling the village also as a point of intersection with the road between Pisa and Siena.

According to tradition, the name came from the holy bishop of Modena, who defended the village from Attila's occupation. 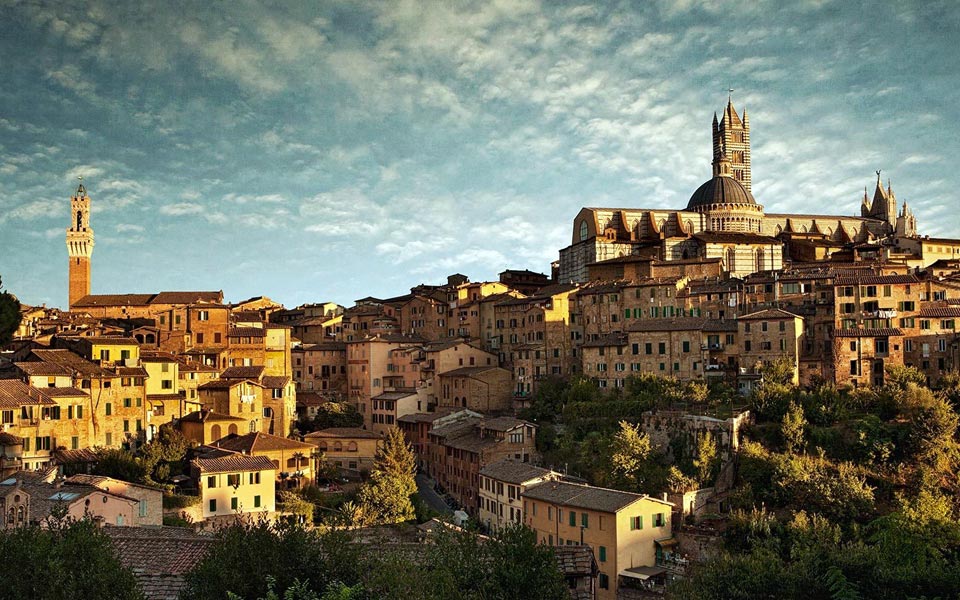 Siena, city of Tuscany, in central Italy, stands out for its medieval brick buildings. Piazza del Campo, the central square with a characteristic fan shape, is home to the Palazzo Pubblico (the Gothic-style town hall) and the Torre del Mangia, a slender 14th-century tower from whose white battlements you can enjoy a wonderful view. The seventeen historic districts (the city districts) extend all around right from the square.

The first known document of the Sienese community dates back to 70: Senator Manlio Patruito reported to Rome that he was beaten and ridiculed with a fake funeral during his official visit to Saena Iulia, a small military colony of Tuscia. The Roman Senate decided to punish the main culprits and severely recall the Sienese to greater respect for the Roman authorities. 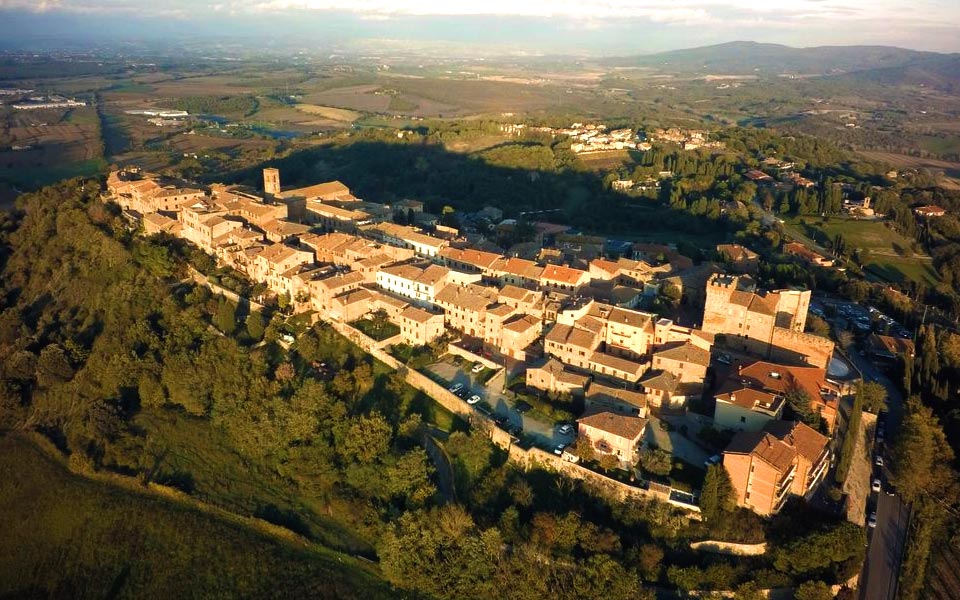 Colle di Val d'Elsa is an Italian municipality of 21 604 inhabitants in the province of Siena in Tuscany. It is the 83th municipality of Tuscany by surface. It is perched in its oldest part on a high hillock.

Starting with numerous and important archaeological finds dating back to the 4th millennium BC, the first documents that testify to Colle di Val d'Elsa date back to the 10th century, but only later, between the eleventh and twelfth centuries, the city acquired the own identity. However, there are numerous testimonies of the area dating back to Etruscan times, such as the necropolis of Dometaia and de Le Ville.

The history and identity of Colle di Val d'Elsa, born and develop, together with that of the other towns of Alta Valdelsa (San Gimignano, Poggibonsi and Casole d'Elsa), in the shadow of both ecclesiastical and civil seigniories . It should not be forgotten that in the Alta Valdelsa the Via Francigena passed and its variations brought a considerable amount of traffic in goods and men and, therefore, guaranteeing a safe income. 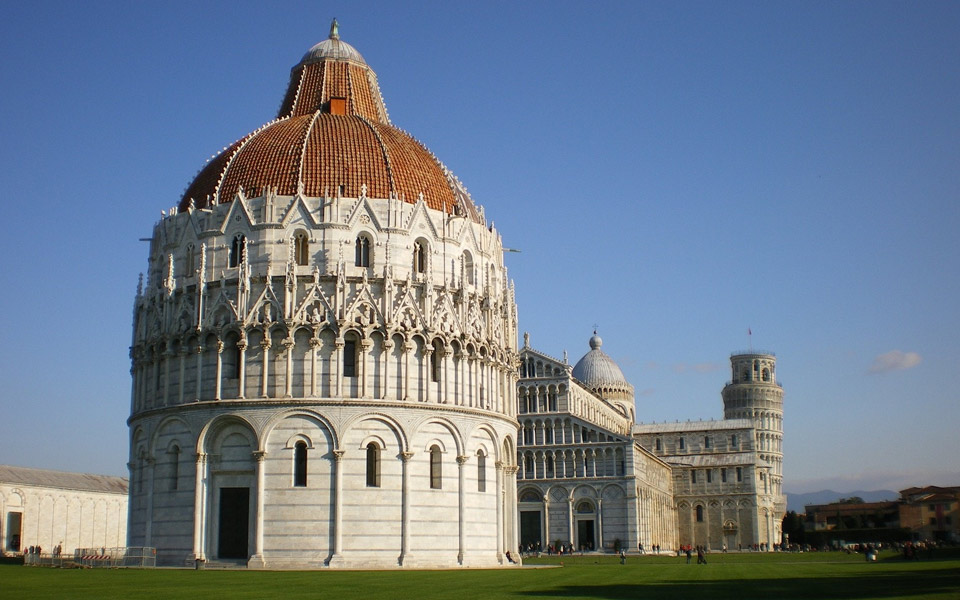 Pisa is an Italian city in Tuscany known above all for its famous leaning tower. Already off-axis to its completion, in 1372, the white marble cylinder 56 m tall is nothing more than the bell tower of the Romanesque marble cathedral that stands next to it, in Piazza dei Miracoli.

The same square houses the monumental Camposanto and the Baptistery, where every day non-professional singers put themselves to the test with their famous acoustics.

The origins of the toponym Pisa are completely uncertain. Without any historical foundation is the history of the foundation of Pisa by Achaean warriors, as reported by some ancient historians: for this reason the name was traced back to the homonymous Greek city of Elis, in the Peloponnese, whose inhabitants, led by Pelops , they would have founded Tuscan Pisa after the Trojan War. For this reason Pisa is nicknamed the city alfea (from the river Alfeo in Elide).

The origins of the city are very old with a settlement dating back to the Villanovan age. In Roman times the city became municipium after the social war and colony with the name of Colonia Opsequens Iulia Pisana. 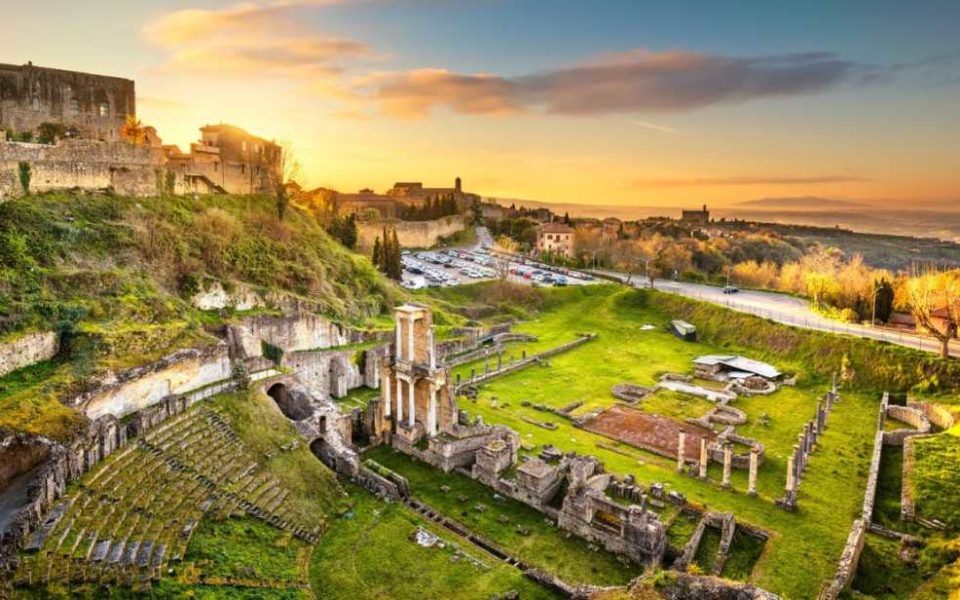 The city, famous for the extraction and processing of alabaster, was one of the main city-states of ancient Tuscany (Etruria), was the seat of an important episcopal dominion in the Middle Ages with jurisdiction over a large part of the Tuscan hills .

Today it preserves a remarkable historical center of Etruscan origin (from this period the Porta all'Arco, magnificently preserved, remains: the Porta Diana, which preserves the blocks of the jambs, most of the city walls, built with cyclopean blocks of local stone; 'Acropolis, where there are the foundations of two temples, various buildings and some cisterns, many hypogea used for the burial of the dead), with Roman ruins (including the Hemicycle Theater) and medieval buildings such as the Cathedral, the Medici Fortress and the Palazzo dei Priori on the homonymous square, the nerve center of the town. 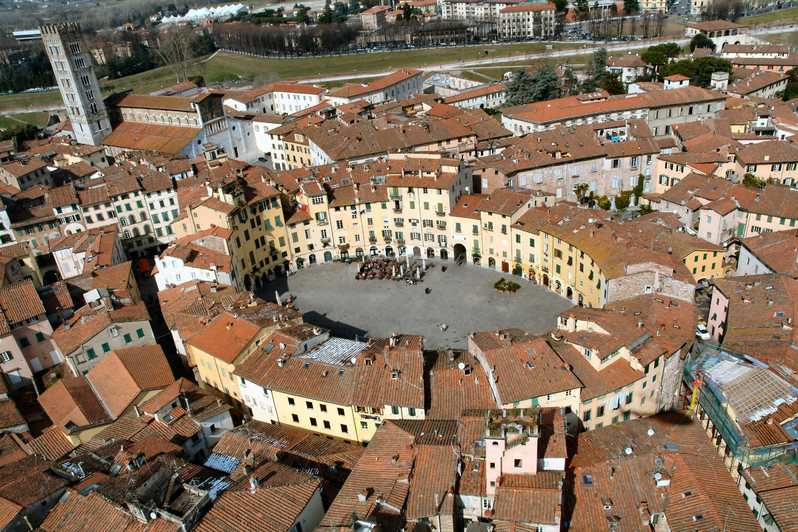 Famous for its historical monuments, for the unique historical center in preserving structures of various ancient ages and especially for the intact 16th-century walls, it is a remarkable Italian city of art. Officially of Roman origins, but on probable previous settlements, Lucca, city of merchants and weavers, maintained its autonomy as an independent state for several centuries until 1799 when the ancient Republic was supplanted, following the French conquest by the Napoleonic troops , giving life to the Principality of Lucca and subsequently to the Bourbon Duchy of Lucca.

Tied closely to tourism, it also lives a lot thanks to the industry and to the lively medium-small businesses (important at a national level are the paper mills scattered throughout the province). In recent years, good quality wineries have developed, especially in the Montecarlo area (D.O.C.) and on the hills surrounding the city.

Versilia is the part of northwestern Tuscany, within the province of Lucca, bordered to the north by the river of Seravezza and to the south by the ancient fort of Motrone, including the territories of the towns of Pietrasanta, Forte dei Marmi, Seravezza, Stazzema . Today, in common use, it also includes the basin of Camaiore and the coastal plain that extends to Viareggio.

The coastal coast has a strong tourist vocation with an extensive sandy coastline and a lively social activity. Some municipalities, in particular Pietrasanta have focused a lot on cultural tourism, which has led to a very diversified tourism in the area compared to the past, which sought essentially relaxation and fun disengaged.

The origins of the city are very old with a settlement dating back to the Villanovan age. In Roman times the city became municipium after the social war and colony with the name of Colonia Opsequens Iulia Pisana.